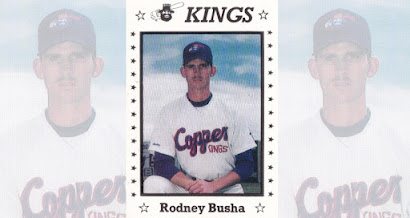 Rodney Busha picked up his second win of the 1990 season for rookie Butte in late-August and he did it by going the distance, The Montana Standard wrote.
Over the second-half of the day's double-header, Busha gave up five hits, five walks and struck out eight, while giving up two earned, The Standard wrote.
That win marked the second of Busha's pro career. It also marked the last. Busha did not return for a second campaign.
Busha's career began and ended that year in 1990, taken by the Rangers in the 18th round of the draft out of the University of North Alabama. Busha was also credited as Rod Busha.
Busha played two sports at Alabama's Sardis High, football and baseball. Before North Alabama, Busha played college ball at Calhoun Junior College.
At North Alabama, Busha went seven innings in a March 1990 win as he gave up eight hits and struck out 10.
He then started with the Rangers at Butte. He threw a scheduled five innings in a June game, striking out five and giving up three hits and no earned. His first loss - his only loss on the year - came in a July game.
Overall, Busha went 2-1 on the year in 15 outings, five starts. He ended with a 5.44 ERA.
He didn't return for 1991, The Standard writing the next April that Busha had retired. 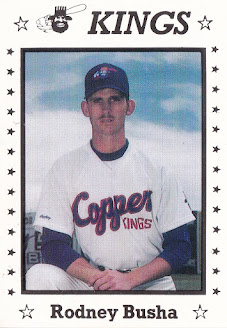