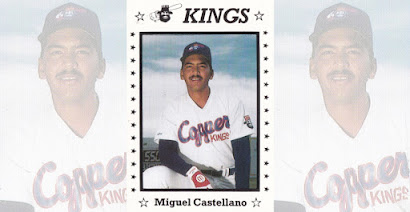 Miguel Castellano kept his Gastonia Rangers the playoff race in this early-September 1991 game and he did it in the first inning, according to The Greenville News.
Castellano did so by hitting an RBI double in the first inning against Spartanburg, scoring the runner from first. The run proved to be the only run needed in the 1-0 victory, The News wrote.
Castellano provided that offense in his third professional season. He went on to play in two more. He topped out at AA.
Castellano's career began in 1989, signed by the Rangers out of his native Venezuela. He was also credited as Miguel Castellanos.
Castellano started with the Rangers in the rookie Gulf Coast League. He hit .247 in 59 games there. He also stole 19 bases.
He moved to rookie Butte for 1990. He singled and scored in an August game. He it .273 overall, with four home runs and 32 RBI over 60 games.
Castellano arrived at single-A Gastonia for 1991. He drove in two runs on a single in a June game. He hit .233 in 114 games.
He played 1992 at high-A Port Charlotte, where he hit .247. He then made AA Tulsa for 1993. He hit a two-run home run in an April game. Overall, he hit .169 in 49 games to end his career. 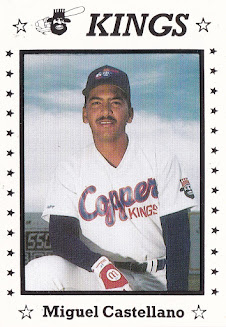