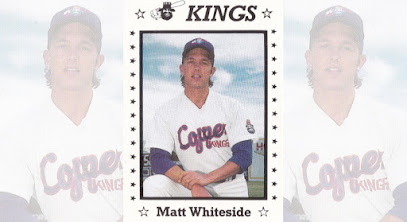 Matt Whiteside pitched well for the Rangers after debuting in 1992. He then tried to return and repeat that effort for 1993, The Fort Worth Star-Telegram wrote.

Whiteside had difficulty early that year, but his pitching coach Claude Osteen had confidence in him, The Star-Telegram wrote.

"Matt Whiteside's going to do a good job for us, I think," Osteen told The Star-Telegram. "He's got a good arm. We're out working every day, polishing the apple and trying to hone the skills."

Whiteside ended up pitching well enough for the Rangers to see time over six seasons, including 60 outings that year in 1993.

He then saw time in five more big league seasons, including his final two outings in 2005. Those final outings came four years after he'd last seen time in the bigs - and after his major league career almost ended on an inadvertent self-inflicted injury.

Whiteside's career began in 1990, taken by the Rangers in the 25th round of the draft out of Arkansas State

Whiteside started with the Rangers at rookie Butte. He went 4-4, with two saves and a 3.45 ERA over 18 outings, five starts.

He then moved to single-A Gastonia, where he turned full-time reliever and closer. He saved 29 games over 48 appearances. He saved another 29 between AA Tulsa and AAA Oklahoma City in 1992. Then, in August, he saw Texas.

In July 1997, Whiteside got what turned out to be the only start of his 11-season career.

"I just look at myself as a pitcher," Whiteside told The Star-Telegram before that start. He went four and gave up five earned.

He then saw 13 games for the Braves in 2001, before he broke a bone in his pitching hand throwing is glove into his locker after giving up a home run in a blowout. Days later, the Braves released him.

"I love competing and I love succeeding, and I'm not happy when I don't succeed and don't pitch well," Whiteside recalled years later to The National Post in Toronto.

He spoke to The National Post in 2005, upon his return to the majors. He'd pitched mainly at AAA in the years after his release by the Braves. He also spent a brief stint in Japan with Yokohama in 2003.

His 2005 return with the Blue Jays proved brief, two games. He gave up eight earned in 3.2 innings of work. He then ended his career at AAA with the Pirates in 2006. 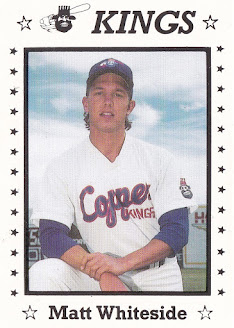