Jon Shave made the most of his time in bigs; Saw three seasons there, including all of 1999 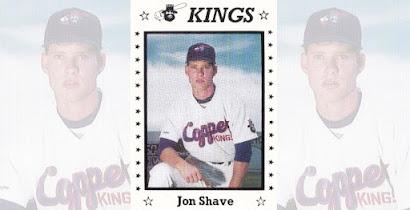 Jon Shave made the third start of his major league career in May 1993 and he played well, according to The Fort Worth Star-Telegram.

Shave picked up two hits over three visits to the plate and knocked in two, The Star-Telegram wrote.

"I was just happy to get the opportunity to play and make the most of it," Shave told The Star-Telegram later.

Shave later was just happy to get out of a game alive as an injury suffered during a spring 1994 contest and not discovered until later could have killed him, according to The Oklahoman.

But Shave returned from that injury to see the majors in two more campaigns - and see the bigs entirely in one of them, six years after his debut and five after his injury.

Shave's career began in 1990, taken by the Rangers in the fifth round of the draft out of Mississippi State. He played his high school ball at Fernandina High in Florida.

Shave started with the Rangers at rookie Butte. He got into 64 games and hit .352. He then moved to single-A Gastonia and high-A Port Charlotte in 1991, then AA Tulsa in 1992.

The injury happened early that spring as Rangers relief pitcher Tom Henke fractured Shave's larynx during a play with his elbow. Shave didn't know the seriousness and even hit a walk-off home run to end the game, according to The Oklahoman.

But he later had trouble breathing and saw a doctor. The doctor expressed surprise that Shave wasn't in the hospital or dead due to the risk of swelling, The Oklahoman wrote.

After surgery, Shave returned to the field within weeks, but it took him until 1998 to make it back to the majors, which he did with the Twins.

The Rangers then selected him off waivers for 1999. Though he saw only 43 games of action, Shave spent the entire season with the big club. He hit .288 with nine RBI.

"This has been a dream come true," Shave told The Star-Telegram that October.

Shave has since returned to Florida, where, in 2018, he started work as head coach at his alma mater Fernandina Beach High.

"My plan is to come in here and make a difference in these kids' lives," Shave told The Fernandina Beach News-Leader then. 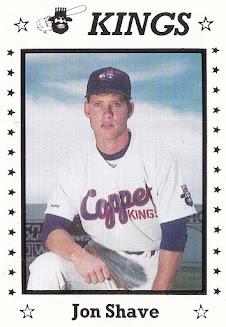