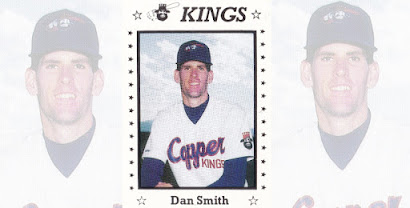 The Rangers top draft choice the year before, Dan Smith gave his club reason for concern in 1991 as he went 4-17, with a ERA north of 5, The Fort Worth Star-Telegram wrote.

"The difference this year was the way I threw my slider," Smith told The Star-Telegram upon his call up. "The slider I had last year was flat but this year I worked with [pitching coaches] Jackson Todd and Oscar Acosta and changed the grip a little, which gave me a downward break with it."

Smith's slider helped him through four outings that year and another 13 two years later. Those 17 big league outings proved the extent of his major league time.

Smith's career began in 1990, taken by the Rangers in the first round, 16th overall, out of Creighton University.

Smith started with the Rangers at rookie Butte, then he quickly moved to AA Tulsa. He made Tulsa in late-July. In his final game before the move, he went six innings as the night's starter and gave up three runs on four hits against Salt Lake, The Deseret News wrote.

"Smith kept us from mounting any threats," Salt Lake manager Nick Belmonte told The News afterward. "We got a run in the first inning, and it looked like we were off and running, and he shut us down."

Smith went 5-2 over his first year, with a 3.71 ERA. He then made AAA Oklahoma City and turned in that 4-17 record. He returned to Tulsa for 1992, then made that September jump to Texas.

He returned for spring training 1993, but lost time due to tendinitis. He ended up losing most of the year, getting only four minors starts.

Smith missed all of 1995 due to injury. He then continued to pitch in the minors and independent ball through 2001. He stayed with the Rangers through 1997.  Then, after a season with independent St. Paul, he played a season each in the Cubs and Braves systems. He last made 10 starts back with St. Paul in 2001 to end his career. 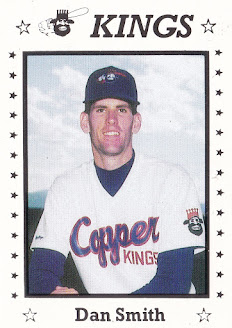