Chris Gies earned the win for single-A Gastonia this night in July 1991. Then he earned the promotion - to AA Tulsa, The Charlotte Observer wrote.

For Gies, he tried to keep his emotions in check, The Observer wrote.

"I don't want to get so excited that I let down (at Tulsa)," Gies told The Observer. "I'll get excited at the end of the season, when the pressure's off and I look back at how I did."

Gies saw Tulsa that year and over the next two campaigns, but he never saw AAA, or the bigs. Later, though, he did come close to making his hometown Phillies, if under lesser circumstances.

Gies' career began in 1990, taken by the Rangers in the 38th round of the draft out of Seminole Junior College in Oklahoma. Gies' name was also misspelled Chris Geis.

Gies played his high school ball at Philadelphia's Father Judge High, where he won Philadelphia Daily News' City Pitcher of the Year award in 1987. At Seminole in 1990, he went 14-3, with a 1.75 ERA.

He also threw five complete games on the year, his fifth of the season against Salt Lake. Gies' manager at Butte Bump Wills praised Gies' work after that August win to The Salt Lake Tribune.

"You saw the art of pitching," Wills told The Tribune of Gies. "[Gies] just kept the batters off balance. ... He's a smart pitcher, [and] he throws his breaking balls for strikes."

Come spring 1995, he took one last look at the pros as a replacement player for his hometown Phillies to end his career.

"It was great to gear up for, but in the back of my mind I knew it wasn’t going to happen," Gies told The Northeast Times years later. "I never went in thinking I was a Phillie. I just wanted to do well enough to get a minor league contract somewhere to try again. When you don't get to where you want to be, it's tough, no matter what you do." 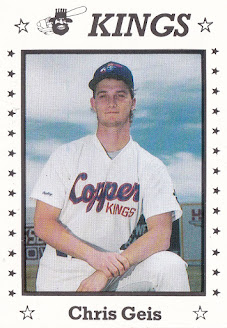