Brian Scheetz had baseball ties as a player, later had them as youth coach; Played two pro seasons 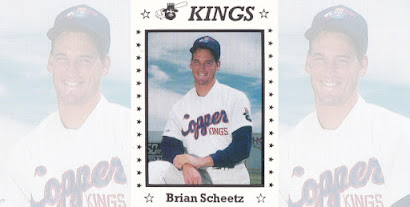 Brian Scheetz had some good baseball ties and to baseball in Butte, Mont., according to The Montana Standard in 1990.
His college roommate went on to play at Butte. He then got to know another former Butte player in extended spring training, he told The Standard.

"So, I heard more about Montana and about Butte," Scheetz told The Standard about his second meeting. "Now, I'm here, myself. Almost feel like a native after being around those two guys."

Scheetz stay in Butte lasted that season, his second as a pro. That second season also marked his last as a pro. Scheetz' baseball ties, however, have continued, in youth baseball as a coach.

Scheetz' career began in 1989, taken by the Rangers in the 44th round of the draft out of the University of Illinois at Chicago.

At Illinois-Chicago, Scheetz threw a one-hitter in an April 1989 game.

He started with the Ranges in the rookie Gulf Coast League. He got into five games there in relief. He won one and saved two, as he gave up one earned in seven innings of work.

Scheetz then stayed involved in the game as a youth coach. In July 2019, as he took over as head coach at Shoals Christian in Alabama, he relayed to The Florence Times Daily coaching a travel ball team seemingly over-matched by their opponent. But his team won.
"It was because our guys knew their role, and what they did they did well," Scheetz told The Times Daily. "They fielded routine balls, they put the ball in play, and we pitched it pretty good." 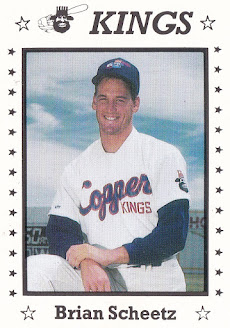