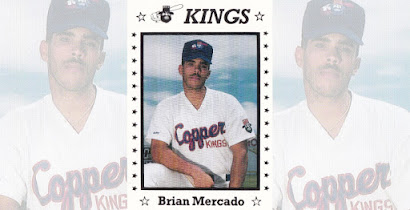 Brian Mercado finished up his first professional season with promise. He'd hit .324 over 52 games in rookie ball and looked for more in season two.

But, he recalled years later to his hometown Norwich Bulletin, his second season didn't happen. And the news came suddenly the next spring.

"I was in the cage one day and a golf cart drove up. (A Rangers official) told me that he appreciated my hard work, but that I was being released," Mercado told The Bulletin in 2015. "I went to the clubhouse, showered up, they handed me a plane ticket and I headed home — surprised and bitter,"

Mercado's pro career started with promise out of New London High School and Eastern Connecticut State. But his career lasted that one season, played entirely at rookie Butte.

Mercado's career began in 1990, taken by the Rangers in the 14th round of the draft out of Eastern Connecticut.

Mercado played professionally as an infielder, but in high school, he also pitched. In May 1987, Mercado explained to The Hartford Courant his choice of baseball over other sports, like wrestling and football, that baseball came naturally to him.

"I've been lucky," Mercado told The Courant as he made an international high school all-star team. "I've had good coaches, even in Little League. I've always had somebody who knew what they were doing. Somebody was always looking out for me."

At Eastern Connecticut, Mercado helped his team to the 1990 Division III World Series title and took home tournament MVP honors. He hit a home run in the title game, one of four shots he hit in the tourney.

"It's going to take a while to sink in," Mercado told The Battle Creek Enquirer after the May 1990 title win. "But I'm going to be walking on cloud nine all summer."

The Rangers then added pro ball to Mercado's summer. Assigned to rookie Butte, The Courant wrote in August that the team selected Mercado for his power and Mercado received praise from his manager Bump Wills.

"Brian has been pretty consistent," Wills told The Courant. "He's got legitimate power, there's no question about that. The Rangers really like his bat, but they don't want to label him as just a designated hitter, so we're trying to find a place to play him."

In all, Mercado saw 52 games that year at Butte. He's recorded as playing in the outfield in six of those games. He hit .324, with three home runs and 26 RBI, numbers that marked the extent of his pro career. 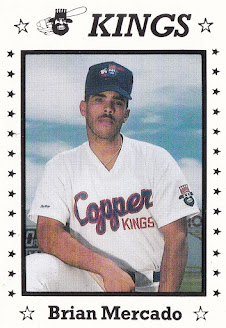