Vince Castaldo made AAA in affiliated ball, got bitter; Turned to independent St. Paul and got remembered 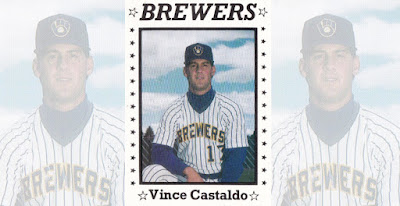 Playing for the independent St. Paul Saints in 1994, Vince Castaldo recounted to The Minneapolis Star Tribune how he got there.

He'd played in four previous pro seasons in the Brewers and Expos systems and made AAA, but he hadn't made the majors. But he'd also run into forces beyond his control, he told The Star Tribune.

"I got jerked around and I didn't handle it well," Castaldo told The Star Tribune. "I got bitter. My performance suffered, and I didn't know if I wanted to play anymore."

Castaldo did end up playing more, and he became one of the top Saints players in the club's history. His affiliated time, however, had nearly concluded. He never made the majors.

Castaldo's career began in 1990, taken by the Brewers in the 33rd round of the draft out of the University of Kentucky. Castaldo was also credited as Vinny Castaldo.

Castaldo started with the Brewers at rookie Helena. He hit .335 in 62 games. He also made the league All-Star team. That August, he hit a two-run home run to help his team to a win, The Helena Independent-Record wrote.

"I was really seeing the ball well tonight," Castaldo told The Independent-Record then.

Castaldo then made AA El Paso for 1992. He hit .289 there. In June, he helped run his team to a win by going first to home on a ball that dropped out of the right fielder's reach, The El Paso Times wrote.

"That was just major league base running. You can't run bases better than he did," El Paso manager Chris Bando told The Times. "Vinny read the ball instantly and took off. I knew he was going to score."

Castaldo also played seven games with the Marlins at AAA Charlotte and in Mexico in 1995. He saw Mexico again in 1996 and then ended his career in 1997 at independent Winnipeg. 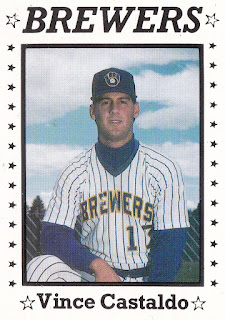