Scott Moseley made it his goal to play in the pros, and the bigs; He played three professional games 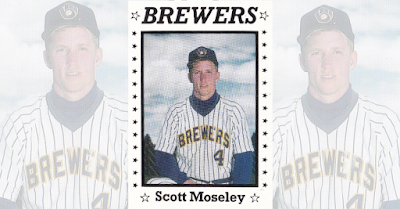 Columbus College shortstop Scott Moseley met with the Georgia governor in July 1988, along with four other players, all to show support for the 1988 U.S. Olympic team, The Atlanta Constitution wrote.

Talk also turned to Moseley, and his future. His future probably didn't include 1992, but he hoped it would include the pros, he told The Constitution.

"My long-term goal, of course, is to play professional baseball, especially in the major leagues," Moseley told The Constitution. "If the pro chance were to arrive before the Olympics, it'd be hard to turn down."

Moseley ultimately did realize his long-term goal, at least partially. He got to turn pro. His pro career, though, proved brief. He played in all of three games.

Moseley's pro career began and ended in 1990, signed by the Brewers out of Columbus College.

In high school, Moseley had a .500 batting average in late-April 1986, enough for a rival coach to single out him and a teammate for praise heading into an upcoming matchup between the schools, according to The Constitution.

"If they are hitting they may be unbeatable," the coach, Mark Kimbro, told The Constitution of the teammates.

Moseley ended up setting the school mark for singles at 46 that year, helping his club to the state title.

In the game leading up to the finals, Moseley got the game-winning hit, a single over the first baseman, The Constitution wrote.

"He just went with the pitch," Moseley's head coach Rob English told The Constitution afterward. "All year long this team has had to come back to win and this was just another time."

Moseley soon went on to Columbus College, now Columbus State. He remains on the list of former players who played in the pros.

Signed by the Brewers in 1990, the team assigned him to rookie Helena. In one June outing, he legged out an infield chopper for a single. Two days earlier, he picked up an RBI on a ground out and scored a run.

That infield single, though, proved to be his only hit as a pro. He went 1 for 7 overall in his three games, marking the extent of his pro career. 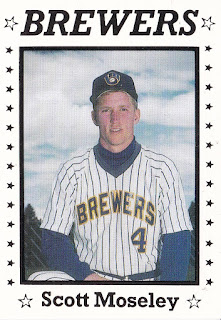