Mike Hooper did a good job pitching in high school, played as a pro over four seasons; He made high-A

Mike Hooper's rival head coach in this May 1989 high school regional could only watch Hooper work, according to an account in the Fond Du Lac Commonwealth Reporter.

Hooper did so as he allowed just three hits and no runs as his Lake Mills team advanced over Horicon with a 9-0 win, The Commonwealth Reporter wrote.

"He struck out 11, so he did a good job pitching," Horicon coach  Richard Tennie told The Commonwealth Reporter afterward. "He's one of their better ones."

Hooper ended up being good enough that year to sign with the Brewers directly out of Lake Mills. His career lasted four seasons. He made high-A.

Hooper's career began that year in 1989, signed by the Brewers as an undrafted free agent.

The hurler started with the club in the rookie Arizona League. He saw seven outings, one start, as he gave up 10 earned in 11 innings of work.

He then moved to rookie Helena for 1990. He started an early season contest and earned praise from his manager Gary Calhoun, according to The Helena Independent-Record.

Hooper's season consisted of five starts. He went 0-1, with a 4.22 ERA.He then returned with the Brewers to start 1991 and played at single-A Beloit. He went 2-3, with a 2.32 ERA there before the Brewers traded him to the White Sox.

Assigned to single-A South Bend, he saw 11 more outings there and had a 2.70 ERA. That August, after the trade, Hooper spoke to The Wisconsin State Journal about the move.

"It was kind of tough adjusting to a new team," Hooper told The Journal. "I think (the trade) is for the better. It's nice to know that somebody wants you."

Hopper, however, returned for just one more season. He saw two more outings at South Bend in 1992, then 21 outings, 11 starts, at high-A Salinas to end his career. 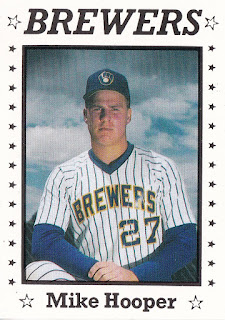