Jose Cardona pitched well over two seasons, but an injury ended his career 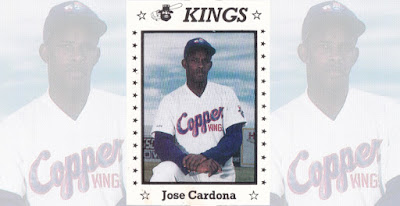 The Gastonia Rangers had fought into extra innings this night in May 1991 and Jose Cardona tried to keep them in the game, The Charlotte Observer wrote.
But Cardona couldn't do it. He hit two batters to open the 10th and the eventual winning run soon came around to score, The Observer wrote.
"You can't dwell on a single game," Gastonia manager Bump Wills told The Observer afterward of the team's performance. "That's part of learning to be a professional."
For Cardona, his opportunity neared its end. Soon after, in his second professional season, an injury would force him to the sidelines. He wouldn't return.
Cardona's career began in 1990, signed by the Rangers out of his native Venezuela. He played in the Dominican Summer League the previous year.
Cardona started with the Rangers at rookie Butte. He got into 23 games in relief. He went 6-3, with a 1.99 ERA and saved four. He set down all three batters he faced to save an August win.
He then moved to single-A Gastonia for 1991 and he started strong. By mid-May, he had an ERA of 1.65, third best on the team.
By early June, though, he was injured with a torn pectoral muscle, then estimated to be about six weeks away. In late July, he went home to Venezuela to end his career. 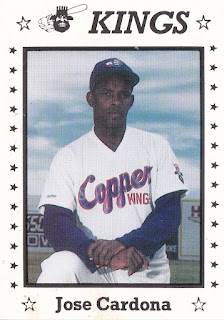