Mead High School senior Geoff Kellogg stood with a 10-1 record and a 1.32 ERA in April 1989 and he attributed his success to learning how to use body, The Spokane Spokesman-Review wrote.

The result, he told The Spokesman-Review, was maximum speed.

"There's a lot of guys that could throw harder if they used their legs," Kellogg told The Spokesman-Review. "It really has nothing to do with how big you are. ... You have to know how to throw."

Kellogg knew how to throw well enough to make the pros later that year. He went on to play in five seasons. He made AA.

Kellogg's career began that year in 1989, taken by the Brewers in the 17th round of the draft, out of Spokane's Mead High. Kellogg was also credited by his full name, Geoffery Kellogg.

After signing with the Brewers, Kellogg called playing as a pro something he'd dreamed of "all my life," The Spokane Chronicle wrote.

Kellogg played 1992 at high-A High Desert. That June, he went seven in a High Desert win. He spoke to The San Bernardino County Sun afterward about consistency.

"I think that the way I felt tonight and the way I approached this game will help me the rest of the year," Kellogg told The Sun. "If I can get in front of the hitters, I'll be in control."

Kellogg soon returned to Spokane and eventually went into a different business, the local water park. He took a job as a manager at Splash Down Family Waterpark and later he and his wife purchased it, The Spokesman-Review wrote in 2012. 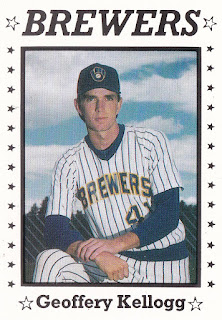