Brian Souza felt something pop as he pitched for the University of Washington in 1988. That pop turned out to be a torn ligament, The Honolulu Advertiser wrote.

Sousa responded by returning home to Hawaii and joining the University of Hawaii. He rehabbed and he worked to get back, The Advertiser wrote.

"I started of working with just a one-pound weight and I had a hard time with that," Souza told The Advertiser in April 1990. "From there I just kept building it because I was determined to at least try to pitch again."

Sousa did pitch again and he spoke to The Advertiser as one of the team's top pitchers and he then went on to the pros. His pro career lasted four seasons. He topped out at single-A.

Sousa's pro career began that year in 1990, taken by the Brewers in the 11th round of the draft out of Hawaii.

Upon his return at Hawaii, Sousa went 6-5, with nine saves and a 3.78 ERA. Brewers scouts liked what they saw, The Advertiser wrote then.

"He had some good spots and he had some fair spots when I saw him pitch this season," Brewers VP in charge of international baseball operations Ray Poitevint told The Advertiser. "He was especially hot in the Easter tournament and he humps the ball up there on an average of 89 mph."

Sousa started with the Brewers at rookie Helena. He went 3-4, with a 5.36 ERA and four saves.

That October, he recounted his first pro season to The Honolulu Star-Bulletin.

"I would say it was a pretty good summer," Sousa told The Star-Bulletin. "The stats weren't that good but I learned a lot. You really have to refine whatever skills you have. If you make a mistake it better be a small one."

Sousa played 1991 between single-A Beloit and Helena. He went 8-5 on the year, with a 4.23 ERA. He returned to Beloit for 1992, but his season amounted to nine outings, his last with the Brewers. 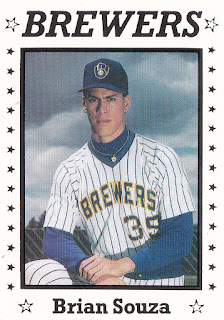