Ron Walden thought he had the ability as top pick, the Dodgers did, too; Then, quickly, came injury 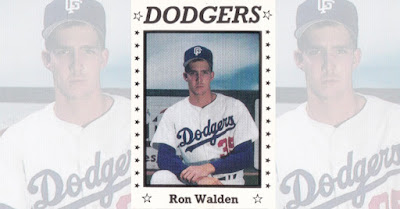 He had been "plagued by bad nerves" in his first pro start, but had gotten out of the gate with a 3-0 record and an ERA of 0.42, The Tribune wrote.

"You can't beat this. The treatment is great. The Dodgers treat you like a person, not a player," Walden told The Tribune then. "I was pulling for them (to pick me). I'm glad they did."

For Walden, however, that point he spoke to The Tribune essentially proved the high-water mark of his professional career. Soon after, a sore elbow would sideline him for the year.

Surgeries and rehab would continue to keep him out over the next two campaigns, only to take the  field for one more brief sting in 1993 at high-A Vero Beach.

Walden's career began in 1990, taken by the Dodgers ninth overall out of Blanchard High in Oklahoma. Walden was also credited as Ronnie Walden.

The Dodgers selected Walden that high after he went 11-0, with a 0.36 ERA and struck out 162 his senior year in high school, according to The Los Angeles Times.

"We just felt that when we drafted, this boy was the best player available," Dodgers scouting director Ben Wade told The Times of the 17-year-old.

Assigned to Great Falls, Walden got off to that enjoyable start. He earned one of his three wins at Salt Lake as he pitched into the sixth inning in front of 9,000 people, according to The Deseret News.

"It's the first time I've pitched in front of this many people, and I liked it," Walden told The News then. "It fired me up."

Soon after, though, came injury.

He would undergo two elbow surgeries and lose the rest of 1990 and all of 1991 and 1992. He seemed to be on the mend to start spring 1993 and got assigned to Vero Beach. He saw just three starts and his shoulder came up sore, The Oklahoman wrote later.

Walden rehabbed again after shoulder surgery, but he couldn't make it back, The Oklahoman wrote in 1999.

"I thought I had the ability," Walden told The Oklahoman then, "but I never had the chance, because I couldn't stay healthy to find out." 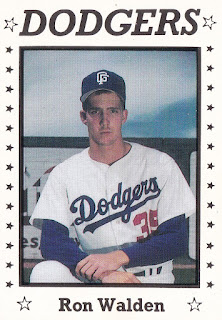