Ron Maurer singled early in this April 1990 game for North Carolina and with it, he'd hit safely in 31-straight games, a school record, The North Carolina Daily Tar Heel wrote.

"It was a relief (to break the record), because it's a long streak," Maurer told The Daily Tar Heel afterward. "Things just happened to fall for me. I didn't feel any pressure to break the streak; I just kept swinging."

Maurer's streak ended there, at 31, a number that remains in the North Carolina record books 30 years later.

On the field, Maurer kept swinging afterward from college, on to the pros. His pro career lasted more than a decade, including time hitting in Taiwan. He made AAA, but he never got to hit in the majors.

Maurer's pro career began that year in 1990, taken by the Dodgers in the 23rd round of the draft out of North Carolina.

Maurer played his first pro season at rookie Great Falls. He hit .270 in 62 games. He then made high-A Bakersfield in 1991. He hit seven home runs on the year, his fifth a two-run shot in an August contest.

"It was a good pitch, the fastball he threw me. I just got lucky," Maurer told The San Bernardino County Sun after that game.

To end the 1995 campaign, Maurer played all nine positions in the Sept. 4 contest. His pitching stint resulted in a 1-2-3 inning.

Maurer has since settled in Virginia where he opened RBA South in 2000, helping to prepare young players in college. He continues as owner and director in 2020. 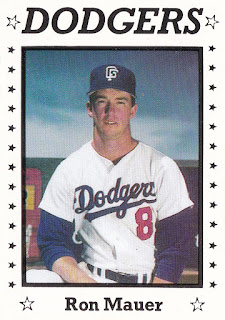