Rob Sepanek spent one season in Braves system, then six with Yankees; Made AAA, not bigs

Originally posted May 21, 2011
Taken in the sixth round of the 1984 draft by the Braves, Rob Sepanek was only given a year to prove that sixth round status.

He hit just .219 at single-A Anderson that year and the Braves gave him his release.

"I thought it wasn't enough time for them to make any kind of decision about me as far as being a prospect," Sepanek told The Schenectady Gazette in 1988. "After I was released, I wrote letters to to 12 or 15 clubs, hoping to catch on with someone."

That someone he caught on with was the Yankees. Sepanek went on to play six seasons with the Yankees, getting as high as AAA. But he never made the majors.

Sepanek's career began that year in 1984, taken by the Braves out of Eastern Michigan University. He played that season at Anderson, hitting three home runs and knocking in 21.

For 1985, he was with the Yankees at short-season Oneonta, his average improving to .275. He also hit five home runs and moved to single-A Fort Lauderdale for 1986.

His 1987 performance earned Sepanek a promotion to AA Albany-Colonie for 1988. But his year was a short one. He only played in 24 games that year, hitting just .212.

But Sepanek only got one more year, making AAA Columbus for 45 games in 1990, the highest he would get. He played another 17 games with the Reds at AA Chattanooga, ending his career.

While Sepanek didn't make the majors, he did get to play in a minor league post season. In 1989, Sepanek helped Albany to its second-consecutive Eastern League championship.

"This is what you play all year for," Sepanek told The Gazette as the A-C Yankees moved on to the finals. "I'd be lying to you if I said we're not playing to win." 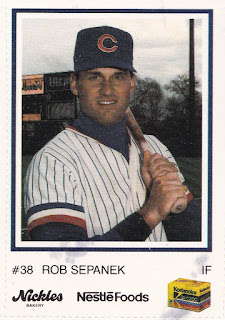