Mike Norris helped his team to an early lead in a July 1990 contest; Played a single season as a pro

Mike Norris came racing around to the plate on his teammate's single in the third inning of this July 1990 contest at Great Falls as the throw came with him, according to The Great Falls Tribune.

Norris slid - and he beat the throw, scoring the first run for his Helena Brewers, the only run they needed in their 4-0 win, The Tribune wrote.

Norris scored that run in his first season as a pro. He also scored it in his last. Norris played that single pro campaign, entirely at rookie Helena.

Norris' pro career began and ended that year in 1990, taken by the Brewers in the 21st round of the draft out of Richland College in Texas. Norris is a native of Garland. He was also sometimes credited as Michael Norris.

Assigned to Helena, Norris got into 32 games as an outfielder. He singled and scored in one June win against Medicine Hat. He then grounded out with the bases loaded in a July contest and walked to extend a late rally in another game that month.

Overall, Norris picked up 12 hits in 67 at bats that year for a .179 average. He hit one double, had one RBI and stole three bases. Those stats marked the extent of his pro career. 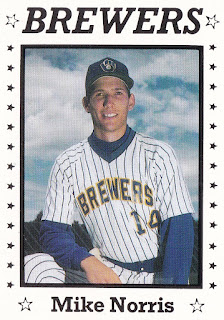