Mark Stephens showed up to the Marlins tryout in April 1992 still in the jacket of the team that had released him days earlier, The South Florida Sun-Sentinel wrote.

"Paid too much to get rid of it," Stephens explained to The Sun-Sentinel then, "although a buddy of mine, when he got released from the Brewers, he burned his Brewers' jacket."

Stephens spoke to The Sun-Sentinel the day he became one of the fledgling Marlins first players under contract, his tryout impressive enough to earn a spot in his third pro season.

He went on to play in four more campaigns, but all those in independent ball. His season as a Marlins minor leaguer proved his last in affiliated ball. He topped out at high-A.

Stephens' career began in 1990, taken by the Brewers in the 17th round of the draft out of Central Arizona College.

Stephens started with the Brewers at rookie Helena. The pitcher saw 14 appearances, starting five. He picked up a save in a late-July game as he went three innings and gave up one hit. He went seven scoreless in another appearance that month, a start, for his first win.

He signed on for the remainder of the year at independent Salt Lake. He went 6-3 there, with a 2.43 ERA over 18 outings, eight starts.

He went on a run of success late that year, both as a starter and reliever. In one late-August appearance, he came into a game in relief, threw three innings and struck out eight, according to The Salt Lake Tribune.

"The last five or six starts, I've felt real confident," Stephens told The Tribune afterward. "I went out again and tried to do the same things I've been doing."

After signing with the Marlins for 1992, Stephens played the year at high-A Salinas. MLB.com actually records Stephens as being the first Marlin under contract to appear in a professional baseball game.

He played the year at Salinas mostly as a starter, but went 3-12, with a 4.88 ERA. He then moved to independent ball. 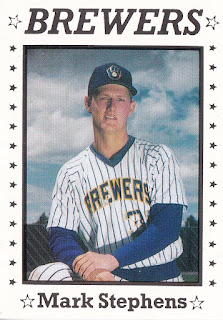