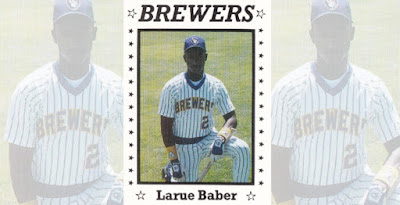 LaRue Baber had to talk it out between taking a scholarship to college or signing as a second-round pick and turning pro, according to his hometown Sacramento Bee.

Baber ultimately chose the pros. College, he figured, would be there in three or four years, too, he told The Bee.

"I made the best decision for me right now," Baber told The Bee after he signed. "I love baseball and my dream is to play pro baseball."

While Baber reached his dream to play pro baseball, he never go to take the final step to the bigs. He made single-A in his third season and high-A in his fourth, but he never made it higher.

Baber's career began that year in 1990, taken by the Brewers 54th overall out of Grant Union High School in Sacramento.

In high school, Baber drew high praise from his coach, Mike Alberghini, according to The Bee.

"Baber, in my opinion, and the opinion of many other coaches in the  area, is the only kid who can beat you in any aspect of the game," Alberghini told The Bee in June 1989. "Be it running, hitting or fielding. And he's only a junior."

Baber started with the Brewers at rookie Helena and in the rookie Gulf Coast League. He hit .168 between them in 54 games.

He returned to Helena for all of 1991 and hit .277 in 67 contests. He hit two doubles in a July contest, one that helped prove the difference late.

Baber made single-A Beloit for 1992. He spoke to The South Bend Tribune that June about working to improve from his tough first year in 1990.

"The big thing about hitting was I was finally able to start recognizing pitches instead of just swinging," Baber told The Tribune. "My first spring training really opened my eyes."

Baber, however, couldn't keep it up. He saw 71 games and hit .204. By 1993, he was in the Padres system, playing largely at single-A Waterloo, but also briefly at high-A Rancho Cucamonga. He hit .272 there and then .229 in 1994 at single-A Springfield and Rancho Cucamonga to end his career. 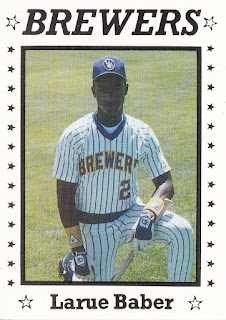