Kurt Archer had to make a decision out of high school, according to The Los Angeles Times: Did he want to play football in college? Or baseball in college?

A choice of football would have taken him to Washington State. A baseball choice, to junior college. He chose baseball, The Times wrote.

"I always wanted to play baseball," Archer told The Times in 1992. "I always enjoyed that much more than football."

Archer went on from playing baseball in college to playing it in the pros. He played a total of eight seasons. He topped out at AAA.

Archer's pro career began in 1990, taken by the Brewers in the 10th round of the draft out of San Diego State University.

Archer found his way to San Diego State after junior college, including time at Lassen Community College. He started in the bullpen, then moved to starter as his pitching coach worked on his delivery, The Times wrote.

"It added four to five m.p.h. of velocity to my fastball and now my slurve breaks downward more," Archer told The Times of the changes in March 1990.

Archer started with the Brewers at rookie Helena and single-A Beloit. He went 5-2 between them in 21 relief appearances and posted a 2.39 ERA.

Archer made AA El Paso for 1993 and 1994. He went eight outs in a June 1994 game for a save as he gave up no runs and struck out three against San Antonio, The El Paso Times wrote.

"I was spotting the fastball real well, moving it in and out," Archer explained to The El Paso Times later. "They've seen me a couple times and were looking for the slider. I'd come with the fastball and it'd be by them before they knew it." 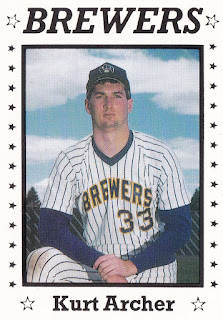