Joe Hall made the White Sox, and started well; Then jumped into wall on play, tore hamstring 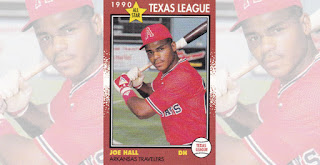 Originally published Feb. 16, 2019
After six seasons in the minor leagues, Joe Hall made the White Sox out of spring training 1994 and he initially proved why by hitting .393 over his first 17 games, The Baltimore Sun wrote later.

His season, however, and possibly his career, then ended with a jump into the wall and a torn hamstring, The Sun wrote.

"That was tough to go through," Hall told The Sun in February 1996. "It took nearly a year to get over that. You find out how much you take normal things for granted, when everything you do, it hurts. There were times it hurt so bad I wanted to cry."

Hall returned from that injury to again make the majors. He saw seven games with the Tigers in 1995 and two more in 1997 to mark the extent of his big league career.

Hall got into those 17 games for the White Sox and went 11 for 28. He also hit a home run. He then got injured.

Hall saw 57 more games in the minors for the White Sox that year. He then played 1995 with the Tigers at AAA Toledo.

He returned to the majors with the Tigers in June. He saw time in seven contests and went 2 for 15.

Hall played 1996 with the Orioles at AAA Rochester, then returned to the Tigers in 1997 for two final major league appearances. He went 2 for 4.

He continued in the minors, Mexico and independent ball over the next two seasons. In 2001, he served as manager at single-A Peoria, then later as hitting coach at Great Falls and Kannapolis.

Hall then returned home to Paducah to manage the Paducah Chief of the Ohio Valley League. He is listed as continuing there for 2019. 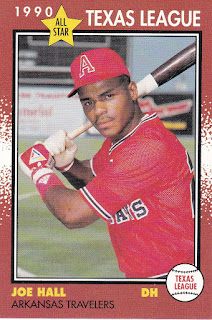