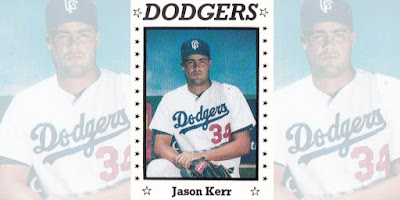 Jason Kerr picked up his first complete game for Cerritos College in late-March 1990, but he almost didn't go the distance, his coach George Horton told The Monrovia News-Post.

Kerr seemed to weaken in the sixth, but convinced Horton he could still pitch - and Kerr went on to strike out the side in the ninth, The News-Post wrote.

"I just asked him how he felt, and he told me he still felt strong," Horton told The News-Post. "I decided to stay with him and he finished strong."

Kerr finished his college career strong enough to get a look at the pros. His pro career lasted five seasons. He topped out at high-A.

Kerr's pro career began that year in 1990, taken by the Dodgers in the eighth round of the draft out of Cerritos College in California.

Kerr started with the Dodgers at rookie Great Falls, used mostly as a reliever. He saw 19 appearances, one start. He went 1-1, with a 3.57 ERA and one save.

He threw 90 mph in an early July relief outing against Salt Lake, while giving up two hits. He gave up one hit in two innings of work in another July contest.

Kerr moved to high-A Bakersfield and short-season Yakima for 1991. He saw 24 relief outings between them, with a 2.73 ERA.

He saw high-A Vero Beach in 1992  and then high-A Rancho Cucamonga for 1993. His 1993 campaign consisted of six relief outings, his last in the Dodgers system. 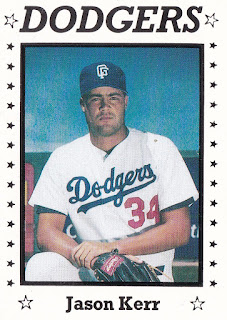