Greg Harrel traced his work as a trainer to a Rangers game; Trained mostly in minors, but also saw bigs

Originally published March 24, 2019
Greg Harrel can trace his career in baseball back to a visit to Arlington, Texas, to a Rangers game, he told The Oklahoman in 1996.

From that trip, he grew to love baseball, then to listening to the Rangers on the radio, he told The Oklahoman.

"One day (long-time Texas trainer) Bill Ziegler was on the radio and after listening to him I decided that might be something that I'd like," Harrel told The Oklahoman.

Harrel eventually did become a trainer, just like Ziegler. He's been a trainer now for more than three decades. He's spent that time mostly in the minors, but he's also seen time in the majors.

The Oklahoma native Harrel's time as a baseball trainer began in 1986, after receiving his bachelor's degree in physical education from Central State University.

He started as a trainer in 1986 with the Rangers at single-A Daytona Beach. He moved to Port Charlotte in 1987 and then to AA Tulsa in 1988. He continued with Tulsa through 1991.

In 1991, Harrel watched over future Hall of Famer Ivan Rodriguez and helped get him through some shoulder stiffness, according to The Tulsa World.

"Ivan has his shoulder strength, and everything seems to be okay now," Harrel told The World that May.

In 2012, he made Los Angeles as an assistant trainer in the majors. He then stayed with the Dodgers at AAA Oklahoma City through 2016. He signed with the Marlins as trainer at AAA New Orleans for 2017 and he continues in that role for 2019. 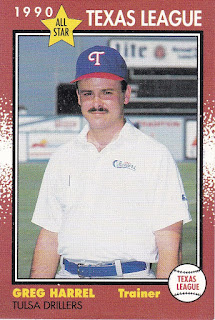