Gordon Powell was always taught to run hard; Did so over 10 pro seasons, made high-A 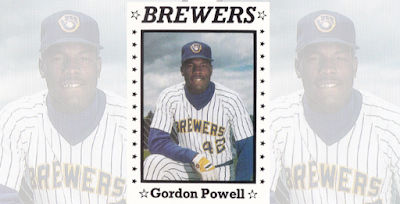 Gordon Powell hit a two-run shot for high-A Stockton early in this July 1995 contest, but his base running, rather than strength, ultimately drew everyone's attention, according to The San Bernardino County Sun.

That's because as he rounded the bases after hitting the shot, Powell tripped on first - and then fell flat on his face, The Sun wrote.

"I was always taught to run hard whenever you hit the ball," Powell told The Sun afterward. "Oh man, was I embarrassed."

Powell ran hard in that game in his seventh professional season. It was also his last in affiliated ball. He played in three more independent campaigns, but he never made it above high-A.

Powell's career began in 1989, taken by the Brewers in the first round, 30th overall, out of Hughes High School in Cincinnati.

Powell started with the Brewers in the rookie Arizona League at at rookie Helena. He hit .302 over 54 games that first year.

Powell then moved to independent ball. He played 1996 largely at Regina, but also saw time at Grand Forks.

A throwout of his at Regina made the book "Leagues of Their Own" as scouts discussed the throw and what it meant.

"If I like what he's doing after I've seen a couple of games and if I think he's healthy, I'll fill out a scouting report and send it to the Braves," Braves scout Lionel Ruhr was quoted in the book as saying.

If Ruhr filled out the card, it didn't get Powell back to affiliated ball. He returned to Regina for 1997 and he then ended his career in 1998 at independent Bend. 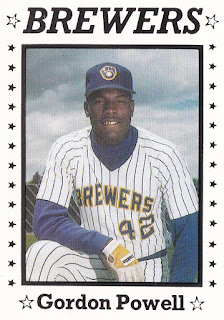