Ed Stryker got a glimpse of the majors in spring 1989 and he wasn't yet even a pro, according to The Bloomington Pantagraph.

The Illinois State hurler got an invite to throw batting practice with the Cubs, The Pantagraph wrote.

"It was a real kick being around those guys and seeing the way they worked," Stryker told The Pantagraph. "Just being around the atmosphere makes you hungry to get there yourself."

Stryker went on to turn pro the next year, as he signed with the Dodgers, not the Cubs. He saw four pro seasons, but he never saw Los Angeles - or Chicago- as a player. He topped out at high-A.

Stryker's career began in 1990, signed by the Dodgers out of Illinois State and Mount Prospect High. He was also credited by his full name, Edward Stryker.

At Illinois State, Stryker helped his team to a May 1989 win by striking out two in the ninth inning with the winning run on third. In 1990, he threw seven complete games and went 8-6. He also threw two shutouts against defending champion Wichita State.

His coach at Illinois State, Jeff Stewart, told The Pantagraph after Stryker signed that Stryker could be an everyday pitcher.

"The Dodgers realize that, even though Ed isn't blessed with exceptional arm strength, he is able to throw all of his pitches for strikes," Stewart told The Pantagraph.

Stryker started with the Dodgers at rookie Great Falls. He went 2-1 over 21 outings, one start, with a 4.39 ERA.

He moved to high-A Bakersfield for 1990, where he got 30 relief outings and picked up three wins and six saves. He picked up one save by inducing a line out to end the game with the tying runner at the plate. 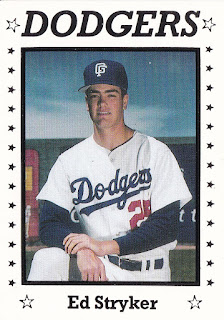