Bill Evers watched over players like Derek Jeter in minors; Later made bigs himself as coach

The prospect, one Derek Jeter, needed to get his feet wet at AA before the club considered a major league call up, Evers told The Daily Gazette.

"He's adjusting to how pitchers are pitching him," Evers told The Daily Gazette the year before Jeter would make his big league debut. "He's got a pretty good approach at the plate. He's a big reason why we've been winning."

Evers watched over Jeter at AA Albany-Colonie in 1994 a decade into his post-playing career as a minor coordinator and manager. He's gone on to a long career since, including making the majors as a coach and briefly standing in as manager.

Evers began in baseball in 1976, taken by the Cubs in the sixth round of the June secondary phase draft. Evers is also sometimes credited as Billy Evers.

Evers started with the Cubs in the rookie Gulf Coast League, moving to single-A Pompano Beach for 1977. He hit .245 at Pompano Beach that year, with five home runs. He hit a three-run shot in one April game and another home run in a late-April win.

He returned to Pompano Beach for 1978, getting time at AA Midland and AAA Wichita that year. He then rounded out his playing career with brief stints back at Midland and Wichita for 1979.

Soon after, Evers started his coaching career, serving as minor league catching coordinator for the Cubs in 1980 and then with the Yankees through 1985. His first coaching position came in 1986 with the Giants at single-A Clinton, managing the club the next year.

Evers made AAA Durham as manager in 1998, helming the team to the 2002 league title. In September 2003, Evers spoke to The St. Petersburg Times about his own career in the minors and wait for the bigs.

"For me, there's disappointment at times. Just like there is for a player," Evers told The Times. "I tell them that all the time. There are lots of disappointments in this game, times when you get smacked in the face and have to rebound. You have to stand up and work hard and good things will happen."

Evers stayed with Durham through 2005. Then, for 2006, he made Tampa Bay himself as bench coach. In May 2006, he briefly filled in for Joe Maddon as manager.

"This is what you work for; to be in the Major Leagues," Evers told MLB.com then, "and the magnification of how important the game is not only to you, but to all the other people involved, the amount of media and scrutiny you're under, it's going to be a lot of fun."

Evers returned as bench coach in 2007 then is recorded as serving as a scout in 2008, then as minor league field coordinator in 2010 and 2011. His son Billy Evers had a brief minor league career of his own.

In 2020, he's set to serve his second year as bench coach for the Twins. 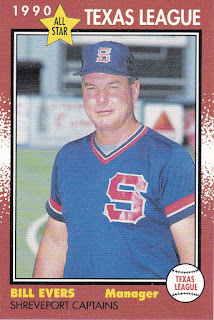