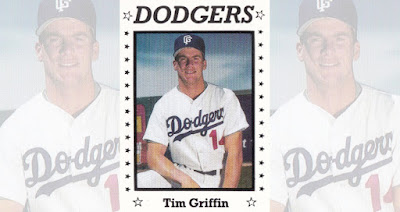 Tim Griffin went on a tear with Stanford in 1990. Her hit 21 home runs by June,  where previously he'd hit just seven over his previous two campaigns combined, The North County Times wrote.

"I honestly don't even know," Griffin told The Times of the source of his newfound power. "I've played a few years and have gotten to be a better player."

Griffin got to be a good enough player for the Dodgers to come calling during that year's draft. But he couldn't improve enough for a long career. He played three seasons and topped out at high-A.

Griffin's career began that year, taken by the Dodgers in the 15th round of the draft out of Stanford.

Griffin started with the Dodgers at rookie Great Falls. He hit .322 while playing second and third over 40 games.

In late-June for Great Falls, Griffin knocked a late two-run single to help his team rally for the win, all with an injured shoulder, The Great Falls Tribune wrote.

"It was very exciting, the game was on the line," Griffin told The Tribune afterward. "In that situation, you just try to control yourself and hit the ball."

Griffin moved to high-A Vero Beach and short-season Yakima for 1991. He hit .247 between them over 62 games.

He then returned to Vero Beach for 1992. He saw 45 games there and hit .254. He also saw eight games at high-A Bakersfield, where he picked up four hits. That season also turned out to be his last as a pro. 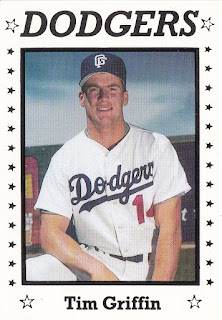