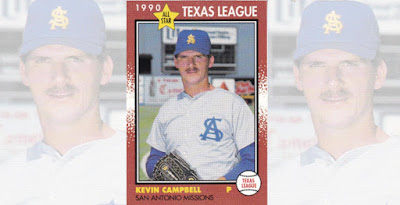 Originally published Nov. 2, 2018
A's manager Tony LaRussa unexpectedly put relief pitcher Kevin Campbell in as a starter in this June 1992 game and Campbell simply went out and threw six innings while giving up a single hit, The Associated Press wrote.

"This is at the top. I was not expecting this," Campbell told The AP afterward. "If Tony decides to start me again, I'll be ready."

Campbell started four more times for Oakland that year, his second season in the bigs, over 32 total appearances. He went on to pitch in three more big league campaigns. He returned to his full-time reliever role, but never saw as much time as he did in 1992.

Campbell's pro career began in 1986, taken by the Dodgers in the fifth round of the draft out of the University of Arkansas.

Campbell started with the Dodgers as a starter at rookie Great Falls. He went 5-6 over 15 starts, with a 4.66 ERA. He then played the next two seasons at single-A Vero Beach.

He then made single-A Bakersfield and AA San Antonio in 1989 and turned reliever. He got into 48 games and saved eight.

He played at San Antonio full time for 1990, then moved to the Athletics for 1991 in a trade. He started the season at AAA Tacoma. In a June outing there, he set down seven of eight hitters he faced. The next month, he debuted in Oakland.

He picked up that 1992 save in an August game against the Rangers, part of a total four-hit Oakland shutout.

He got into 11 more games for Oakland in 1993. He threw five scoreless outs in a July game, but gave up 13 earned in 16 innings overall.

Campbell signed with the Twins for 1994. He got into 14 games with Minnesota in relief that year and six more in 1995 to end his career. 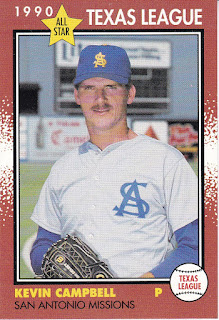