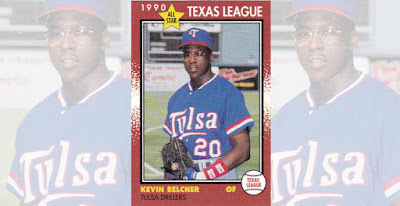 Originally published June 29, 2011
The Jackson Mets broke an unwritten baseball rule and Kevin Belcher took it upon himself to instruct them.

Up 10-1 on Belcher's Tulsa Drillers, Jackson runner Terry McDaniel stole second, The Orlando Sentinel wrote. Belcher, serving as designated hitter, responded by yelling at McDaniel. Belcher was ejected. Seven others would also be tossed after the ensuing bench-clearing brawl.

"That stolen base got my players upset," Tulsa Manager Tommy Thompson told The Sentinel after that June 1990 game. "We don't try to show up professionals. They had a big lead at the time."

Belcher took that passion from AA Tulsa in June 1990, all the way to majors by September. The 16 games he got into that year, though, were the only 16 games he would see in the majors.

Belcher's career began in 1987, taken by the Rangers in the sixth round of the draft out of Navarro College. Belcher played that first year in the rookie Gulf Coast League, hitting .209 in 58 games.

Belcher got into 16 games, with 15 official at bats. He got two hits. He also scored four runs, scoring one Sept. 10 as a pinch runner.

Belcher returned to the minors for 1991, splitting time between Tulsa and AAA Oklahoma City. After another year at Tulsa in 1992, Belcher arrived with the White Sox system for 1993.

Belcher played that year, his final year, at AA Birmingham. He hit .222, with 13 home runs. He hit one of his home runs Aug. 22 in a Birmingham loss. 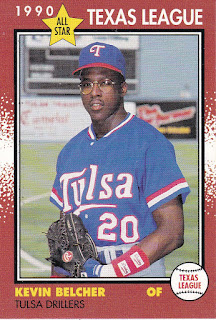