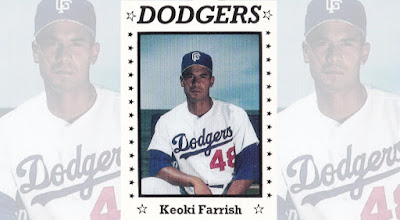 Keoki Farrish worked to break up a crucial double play in this June 1990 game, but the umpire felt he interfered, The Great Falls Tribune wrote.

Farrish's manager with the Great Falls Dodgers, Joe Vavra, "argued vehemently" with the umpire, but the call stood, The Tribune wrote.

"The ump said he (Farrish) tried to knock the ball down. No way," Vavra told The Tribune. "Keoki came in with a real hard slide. He was trying to break up the double play."

Farrish made that hard slide in his first season as a pro. He went on to see two more campaigns. He topped out at high-A.

Farrish's career began that year in 1990, taken by the Dodgers in the 12th round of the draft out of Oholine Junior College in California.

At Ohlone, Farrish won conference MVP honors for 1990 as he hit .405 against conference opponents.

With the Dodgers, Farrish started at rookie Great Falls. He hit his first pro home run in a July game against Salt Lake. Overall, he hit .252 over 61 games with that one home run. 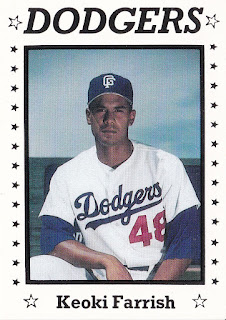