Mets minor league coach Juan Lopez described a young Jose Reyes to Newsday in 2002, noting that all the guys liked him due to his personality.

"He looks like he belongs on this level. That's the way he approaches the game," Lopez told Newsday in the Mets clubhouse. "And he's smart. You explain something to him once, and that's all it takes."

Lopez spoke from experience as both a longtime player and a coach. His own playing career lasted 14 seasons, 11 of those spent at AAA. Lopez never made the majors, but he has gone on to a long career as a coach for the Tigers and the Mets organizations.

Lopez' career in baseball began in 1971, signed by the Brewers out of his native Puerto Rico.

Lopez hit .255 over his first year at AAA. He then stayed at AAA for the next decade. He moved to the Tigers system for 1980 and stayed at AAA Evansville for five seasons. He last played in 1984, where he hit .233 over 61 games.

Lopez then started his coaching career. He signed on with the Tigers as a minor league instructor that December.

He then served as a coach at single-A Fayetteville in 1987, then at short-season Niagara Falls in 1989. In 1990, he filled in as manager at Niagara Falls while the named manager Aurelio Rodriguez tended to personal business at home.

Asked by the Buffalo News in June 1990 about his team's chances, Lopez wasn't sure yet.

"It's too early to tell, we haven't played anyone yet," Lopez told The News. "I don't know what we've got."

Lopez continued in the Tigers system through at least 1993. He soon joined the Mets system. He served as an instructor at rookie Kingsport. In 2002 and 2003, he served as a coach with the Mets, handling advance scouting reports.

He served as a coach at short-season Brooklyn in 2005. Most recently, he's credited as coaching at high-A St. Lucie in 2009. 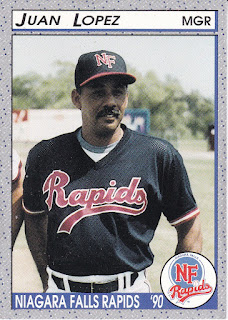