James Daspit bubbled with potential out of college; Played eight seasons, made AAA 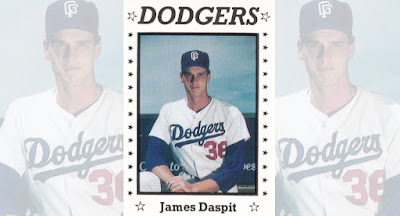 James Daspit didn't pitch long prior to his season at Cal State-Sacramento in 1990. In fact, he'd gone out for baseball in high school, then got bumped from the team and played tennis, his hometown Honolulu Advertiser wrote that June.

But he had other things going for him, including his size and his fastball, The Advertiser wrote, enough for the Dodgers to take him in the 14th round of the draft.

"He's bubbling with potential," Dodgers scout Mark Sheehy told The Advertiser after Daspit signed. "The only thing he lacks is innings. He has everything else."

Daspit got his innings, enough to span eight seasons as a pro. Daspit, however, never got innings in the majors. He topped out at AAA.

Daspit's career began that year in 1990, taken by the Dodgers 380th overall out of Sacramento. Daspit was also credited as Jimmy Daspit and Jim Daspit.

Daspit started with the Dodgers at rookie Great Falls. He went 5-2 over 14 games, nine starts, with a 4.06 ERA. He also took the win in the deciding game of the Pioneer League championship series.

"He had one of the best arms on the ballclub," Conti told The Tribune. (Conti's pitching staff at Great Falls that year also included future Hall of Famer Pedro Martinez.) "I thought if I was doing my job of developing the young pitchers, I had to go with him, sink or swim."

He made AA San Antonio for 15 starts in 1993, a season shortened by injury. The Dodgers then traded him to the Astros for 1994. He spent the season at AA Jackson.

That July, Daspit cited his new surroundings and a changed outlook in expressing confidence to The Advertiser that he would move up.

"I now believe I can pitch in the major leagues," Daspit told The Advertiser. "I could not tell you that last year."

Daspit played his final season in 1997 between Edmonton and AAA Las Vegas with the Padres. He saw 13 outings, two starts to end his career. 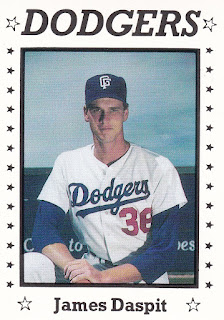