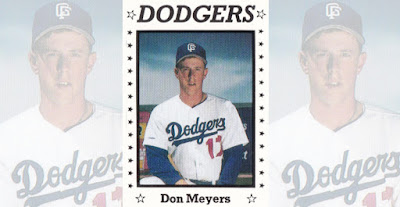 Don Meyers started his pro career as an infielder. By his second year, though, he made the switch to catcher as the organization had a glut of infield prospects ahead of him, his hometown Sacramento Bee wrote.

Meyers found the transition to be a good one, he told The Bee in August 1991.

"I feel great about being a catcher," Meyers told The Bee as he still learned the position at short-season Yakima. "It's a lot more fun. You're in on every pitch, calling the game. I enjoy throwing runners out. I've been throwing really well to second, and  I've been blocking the ball well."

Meyers' career began in 1990, taken by the Dodgers in the 52nd round of the draft out of Sacramento City College.

With Great Falls, Meyers got into 38 games as a first baseman and third baseman. He also caught one game. He hit .326 over those 38 games. He singled in a July rally against Salt Lake. He then knocked three singles in a win later that month.

Meyers moved to Yakima for 1991. He hit .312 there over 50 games. He saw 12 total games at catcher and played his other time on the infield. 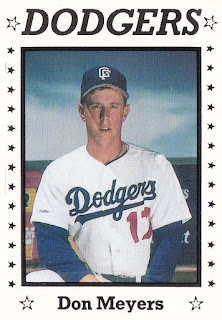