Originally published June 7, 2019; Updated April 2020
After a reading of baseball rules that kept him from the Twins dugout during games, coach Rudy Hernandez eventually returned as those rules relaxed.

He'd been spending games watching video in the team clubhouse. With the relaxed rules, he could go back and forth, The St. Paul Pioneer Press wrote.

"I think it's better," Hernandez told The Pioneer Press in August 2018. "They come from the plate to the dugout and they see me right there, and we can talk a little bit about all kinds of stuff. Sometimes they'll ask me something about baseball and I'll tell them, but at the same time I can talk to the other coaches."

And Hernandez knows something about baseball. He's played and coached in it for more than three decades.

Hernandez played five seasons on the field. He then moved on to a coaching career that continues in 2020 as the major league hitting coach for the Twins.

Hernandez' career in baseball began in 1987, signed by the Mets as an amateur free agent out of his native Venezuela.

He made AA Jackson for 1990 and hit .242. He played his final season in the minors at AA Williamsport for 1992, hitting .217. He then played three seasons of summer baseball in Venezuela.

Hernandez then joined the Twins system as a coach and has spent 24 seasons with the club. As a manager in the minors, Hernandez won Manager of the Year honors in the Appalachian League for 2001.

He served as hitting coach at AA New Britain in 2010, watching over a young Ben Revere.

"He is a guy who is natural," Hernandez told MiLB.com that June. "I don't try to tell him to do too much because he has been doing well all these years."

Hernandez was named Twins assistant hitting coach for 2015. In 2020, he is set to become the team's top hitting coach.

Amid the dugout questions in 2017, Twins Manager Paul Molitor spoke to The Minneapolis Star-Tribune of Hernandez' worth to the team.

"We had conversations about how to best utilize our spots in the dugout," Molitor told The Star-Tribune. "Rudy's a very high-valued guy here. The conversation I had with him was about how, systemically, it was going to change, but basically he’s in the same position." 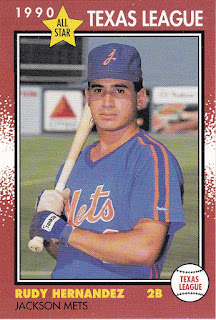