Rob Giesecke served as a minors trainer for the Dodgers, then found a home in Vero Beach

Originally published Nov. 24, 2018
Rob "Doc" Giesecke first arrived in Vero Beach in 1980 and he's been an almost constant presence there since.

Giesecke started there as a trainer, in his second year training in the pros. He remained there in 2010, two seasons after the Dodgers left for Arizona, in his capacity overseeing maintenance at the facility, according to The Orlando Sentinel.

"My wife has said to me — often — that she'll end up burying me in here somewhere," Giesecke told The Sentinel in March 2010.

Giesecke's connection to the Dodgers, and later Dodgertown, began in 1979, when the Peru, Neb., native signed on with the organization out of Mankato State University. He graduated there that January with a degree in physical education and athletic training, according to his 1979 TCMA card.

Giesecke continued with Vero Beach in 1985. By that time, Giesecke and his wife had made Vero Beach their home. He also had taken on a second role, assisting in the offseason with the Dodgertown grounds and maintenance staff.

Giesecke continued training in Vero Beach through 1988. He then moved up to AA San Antonio in 1989 and served as a trainer for the Texas League All-Star team in 1990. 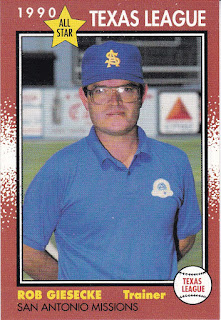