Rob Fazekas pitched better than his record in college; Played two seasons as a pro

Rob Fazekas started slow in 1990 for Rutgers, at least slow as far as his record was concerned, according to The Record of Hackensack.

His coach Fred Hill, though, knew Fazekas' pitching was better than his record indicated, according to The Record.

"He's 1-4 with a 4.86 ERA, but that is in no way indicative of how he's pitched," Hill told The Record. "He's throwing the ball very well. The fact is he just hasn't gotten much defensive help, and we're just not hitting behind him."

Fazekas threw well enough for Rutgers that year to turn pro in June. His pro career lasted two seasons. He topped out at single-A.

Fazekas' career began that year in 1990, taken by the Tigers in the 38th round of the draft out of Rutgers. He played his high school ball at DePaul in Wayne, N.J. Fazekas was also credited as Bob Fazekas.

With the Tigers, Fazekas started at short-season Niagara Falls. He saw 14 starts that year. He went 6-6, with a 5.55 ERA. He also threw a complete game and struck out 58.

Fazekas moved to single-A Fayetteville for 1991. Turned reliever, he saw 24 outings, went 1-4 and saved six. He also ended with a 1.98 ERA. That season proved his last as a pro. 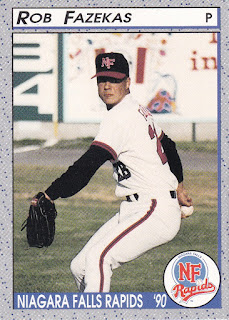