Young hurler Pete Schourek had a big league fastball and curve, his pitching coach at AA Jackson Bob Apodaca told The Washington Post in August 1990, but he needed consistency.

"That's what the minor leagues are all about," Apodaca told The Post as Schourek threatened to log 20 minor league wins on the season. "What sets him apart besides his stuff is his composure and his willingness to learn. He's the type of individual who can listen to something one second and do it the next."

Schourek didn't hit 20 wins that season, but he threatened that mark again later - in the majors. He went on to pitch in the majors over 11 seasons and in one, 1995, he won 18 and came in second in the National League Cy Young voting with the Reds.

Schourek's career began in 1987, taken by the Mets in the second round of the draft out of Marshall High in Virginia.

Schourek started with the Mets at rookie Kingsport. He missed 1988 then hit single-A Columbia for 1989 and made AA Jackson and AAA Tidewater for 1990.

In April 1991, he made Flushing. He saw 35 outings and started eight. He went 5-4 overall, with a 4.27 ERA. That September, he threw a one-hit shutout against the Expos for his first win as a starter.

"It's hard to describe my feelings," Schourek told The Post later. "I just wanted to go seven or eight innings, especially after my last start in Cincinnati was so bad. I put a lot of pressure on myself for this game. I was trying to make (the Mets) think about me for next year."

"He's been doing that all year," teammate Reggie Sanders told The Los Angeles Times of Schourek. "I wasn't at all surprised with Pete."

Schourek's season garnered him enough support for a distant second to Greg Maddux for Cy Young. 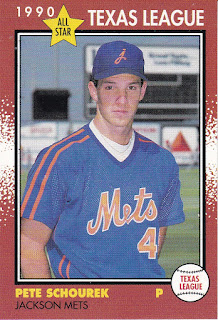