Joe Decker only knew how to pitch one way, to have command; Saw nine ML seasons, briefly coached

Joe Decker only knew how to pitch one way, to have command, he told a reporter in May 1970, according to The Indianapolis Star.

He spoke to the reporter on the occasion of a near complete-game shutout as he pitched the Cubs to a win against the Pirates.

"You have to pitch that way," Decker told the reporter. "During the first five innings I depended mainly on my curve ball and slider. During the late innings I had a sinking fastball and I was lucky. The Pirates couldn't guess when I was going to use it. That's the way of staying in command."

Decker pitched that game for the Cubs in his second season in the majors. He went on to pitch in nine big league campaigns, and have a brief stint as a coach.

Decker's career in baseball began in 1965, taken by the Cubs in the ninth round of the draft out of Petaluma High School in California.

Decker started with the Cubs at rookie Treasure Valley. He made AAA Tacoma in 1968 and then Chicago in September 1969.

He got into four games for the Cubs that first year, starting one. He gave up four earned in 12.1 innings.

"It's got to be the best game I've ever pitched in the majors and maybe now I can really get going," Decker told The Associated Press after that game.

He then played in the Senior Professional Baseball Association in 1989, then served as a coach with the Tigers at short-season Niagara Falls in 1990.

In March 2003, Decker passed away at the age of 55 after suffering a fall at his home. 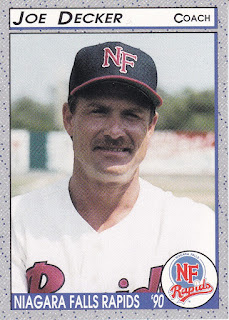