Henry Rodriguez wanted an opportunity, then took it to 11 major league seasons

Originally published Dec. 29, 2018
After seemingly finding an every-day job in the majors in 1995 and then going down with injury, Henry Rodriguez came back the next year stronger than ever, The New York Times reported.

He also had success, hitting 21 home runs through early June to lead the National League and making that the 1996 All-Star game.

"All I've ever wanted was an opportunity," Rodriguez told The Times that July. "I know a lot of guys who never got an opportunity to play in the big leagues. I had to wait almost four years for mine. Just getting a chance to play every day is the best thing that's ever happened to me."

Rodriguez got his big opportunity with the Expos, in his fifth season in the majors. He went on to hit 36 home runs that year, after posting a previous major league high of eight.

Rodriguez continued playing regularly in the majors through 2000 and hit 20 or more home runs over five-straight years. He topped 30 over two of them.

Rodriguez' career began in 1985, signed by the Dodgers as a free agent out of his native Dominican Republic.

Rodriguez hit the field with the Dodgers in 1987 in the rookie Gulf Coast League. He moved to short-season Salem in 1988 and hit AA San Antonio in 1990.

He showed a glimpse of his power at San Antonio, hitting 28 home runs. The Dodgers tried to improve his swing from there and have him pull pitches. Rodriguez fared worse with the new swing and the Dodgers admitted the mistake later.

"He is a much better hitter when he uses the whole field," Dodgers superscout Mel Didier told The Chicago Tribune in 1996. "He can drive a ball to left-center field and dead center as well as anyone I know."

Going into 1995, Rodriguez hit four home runs in a game to close out spring training. The Dodgers then traded him to the Expos the next month. He saw 45 total games that year due to injury, but returned for his break-out 1996 campaign. In addition to his 3 home runs that year, he also knocked in 103 runs.

After playing 1997 back in Montreal, he arrived with the Cubs for 1998. He also felt right at home in Chicago, he told The Tribune later.

"I want to be here until I retire," Rodriguez told The Tribune in July 2000. "I love the way the fans and this organization have treated me." 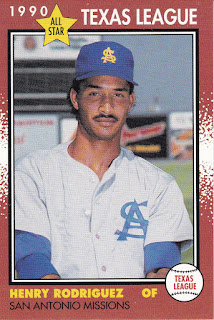