Dave Mastropietro was ready to play baseball; Played it professionally over a single season

Dave Mastropietro ran into some injury problems his final season in college, but he finished strong enough to be drafted, according to The Philadelphia Daily News.

After his early troubles, Mastropietro told The Daily News he just wanted to look forward.

"All in all. I'm just happy to be drafted," Mastropietro told The Daily News. "I want to go play some baseball."

Mastropietro went and played some baseball, but his time in the pros proved brief. His career consisted of a single campaign, spent at short-season Niagara Falls.

Mastropietro's career began and ended in 1990, taken by the Tigers in the 22nd round of the draft out of La Salle University.

At La Salle, he it 10 home runs in his 1990 season, still good for sixth all-time at the school. He also it 24 home runs over his career there, good for a tie for fifth.

With the Tigers, Mastrpietro played his season at Niagara Falls. He broke up a no-hitter in the eighth inning of a July game against Utica with a single. Overall, he hit .187 over 32 games, with four home runs in his only season in the pros. 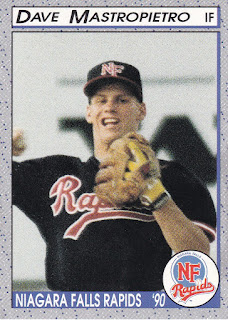