Brian Saltzgaber experienced the great feeling of playing as a pro; Saw five seasons, made AA 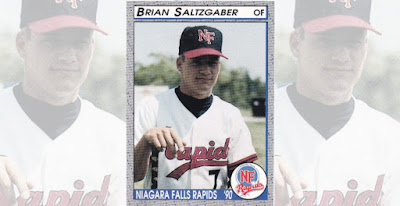 Brian Saltzgaber returned home to Michigan in January 1992 and was even featured in a local card show to sign autographs, according to The Battle Creek Enquirer.

By that point, Saltzgaber had two pro seasons under his belt, had played at single-A and had designs on going higher.

"It's a great feeling," Saltzgaber told The Enquirer of his ride in the pros that far. "I guess it's what you dream of when you're little, to be doing this and be where I'm at."

Saltzgaber did make it higher, but he didn't make it to the bigs. He played five seasons and topped out at AA.

Saltzgaber's career began in 1990, taken by the Tigers in the 24th round of the draft out of Western Michigan.

Saltzgaber went to high school at Michigan's Tekonsha High and also played football. He made all-league as a linebacker and place kicker and honorable mention at quarterback.

At Western Michigan, Saltzgaber proved a key member of the school's conference championship team in 1989 as he hit .337 over his first 51 games, The Enquirer wrote.

"I knew I was going to play," Salatzgaber told The Enquirer of his success that year over spotty playing time a year earlier. "It's just a big difference, knowing you're going to play every day."

Saltzgaber started with the Tigers in 1990 at short-season Niagara Falls. He hit .225 over 53 games.

He spoke to The Enquirer after after being drafted and he looked forward to getting on the field.

"I just want a shot," Saltzgaber told The Enquirer. "The hardest part is just getting here (drafted). It's a dream come true." 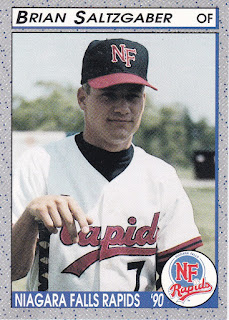