Wes Grisham helped his LSU Tigers to the College World Series; Played one season as a pro

Wes Grisham helped his LSU Tigers to the 1990 College World Series, but Grisham looked ahead not only to those games, but beyond to his possible future in the pros, according to his home state's Oklahoman.

"I've been pretty consistent with my bat," Grisham told The Oklahoman early that June. "There's a lot of guys in pro ball who are there because of their bats. Hopefully I can be another one."

Grisham did make the pros, but his stint there turned out to be brief. He played a single pro campaign, amounting to 46 games spent at short-season Welland.

Grisham's pro career began and ended that year in 1990, taken by the Pirates in the 12th round of the draft out of LSU.

He played his high school ball at Norman High in Norman, Okla. There, he won the Oklahoma City area's triple crown, though he faced tough competition in an Oklahoma-California high school series in June 1986, according to The Oklahoman.

"The main thing this series showed me was that I still have a lot to work on and a lot of room to improve. Those guys were unbelievable," Grisham told The Oklahoman.

He made Baseball America first-team All-America in 1990 and Sporting News' second-team. He also made first-team all-conference both years.

With the Pirates, Grisham played his year at Welland. He got into 46 games and hit .265. He hit one home run and knocked in 20. He picked up a hit and an RBI in a July game. That season marked his only one as a pro. 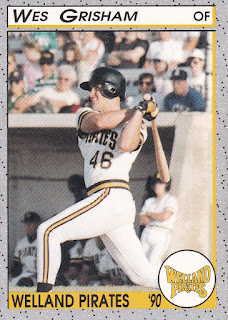