"Our pitching staff is the key for us," Krga told The Times. "Mr. Polewski just does an outstanding job with the kids."

The father, however, didn't directly coach his son, at least at Chicago Washington. That's because the pitching coach's son was an infielder.

Steve Polewski went on from high school to play in college and the pros. His pro career lasted two seasons and topped out at high-A.

Polewski's career began in 1990, taken by the Pirates in the 30th round of the draft out of Chicago State.

At Chicago Washington, Polewski picked up two hits in an April 1985 contest.

With the Pirates, Polewski debuted with short-season Welland. He hit .317 in 37 games. On his card back, the Chicago-native cited Ryne Sandberg as his favorite player and the White Sox as his favorite team.

Polewski then played 1991 at single-A Augusta and high-A Salem. He went 4 for 4 in one June game with Augusta. Overall, he it .250 in 80 games to mark his final season as a pro.

Polewski, however, continued playing, but did so in semipro ball. In August 1993, he was listed as playing with the Dolton Braves in the National Baseball Congress World Series. 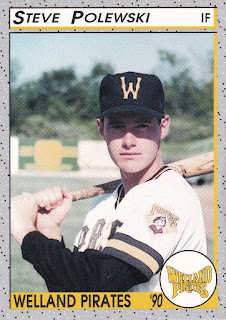