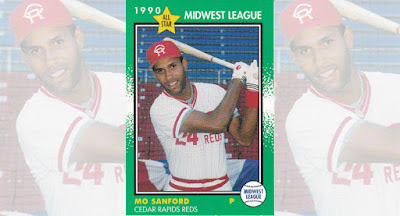 Originally published May 27, 2010
Mo Sanford couldn't believe he'd been called up to the Reds. The Padres wished he hadn't.

"He was real tough," Padres leadoff hitter Bip Roberts told reporters afterward. "Our scouting report said his breaking ball wasn't one of his better pitches, but after that first at-bat, I told the guys, 'this boy is for real, you'd better be ready."

It was a call-up that came in his fourth year of professional ball. Sanford was a late-round draft pick by the Reds in 1988, taken in the 32nd round out of the University of Alabama.

He did well in the low minors, posting a 12-6 record at Greensboro in 1989, making the South Atlantic League All Star team. He had an even better 13-4 mark at Cedar Rapids for 1990.

Sanford was rewarded in 1991 with a promotion to AA Chattanooga, then AAA Nashville and Cincinnati in August. He started five games for the Reds that year, with an ERA under 4.

He spent 1992 back in the minors, at Chattanooga and Nashville. But a 5.68 ERA in 25 AAA starts left the Reds to leave him unprotected in the expansion draft and the Rockies took him with the 62nd pick. One reporter called Sanford's right arm powerful, one that oozed potential.

Called back to the majors that next July, Sanford got his first win as a Rockie Aug. 8, scattering five hits over seven innings. The win stopped a 13-game Rockie skid. It was also Sanford's second and final win in the majors.

In 1997, Sanford pitched in Taiwan. In 1998, he got a look from the Angels in spring training, but didn't catch on. Instead, he pitched in Mexico. Sanford's playing days weren't done until 2000, after two seasons in independent leagues.

A sports reporter for The Daily Gazette in Schenectady in 2009 recalled one 1999 Sanford start with Massachusetts. Sanford gave up a run in the first, then set down 11 straight batters and 19 of 20. 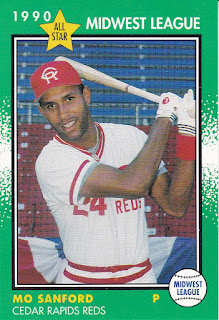