Young Pirates prospect Mike Zimmerman impressed Pittsburgh enough in 1992 for the club to place him on their expansion draft protected list, according to The North Hills News Record.

Zimmerman told The News Record the next spring that he saw that as a sign of trust in his abilities.

"I know Pittsburgh believes in me," Zimmerman told The News Record then. "Being protected in the expansion draft, that shows an investment, that shows confidence. And it just made me want to go up there and play in the black and gold even more."

Zimmerman made AAA with the Pirates for the first time that year, but, in 10 pro seasons, Zimmerman would never make Pittsburgh or the majors.

Zimmerman's career began in 1990, taken by the Pirates 27th overall in the draft out of the University of South Alabama. Zimmerman was also credited as Michael Zimmerman.

Zimmerman started with the Pirates at short-season Welland and high-A Salem. He went 3-1 between them in 28 outings.

He split 1993 between Carolina and AAA Buffalo. He went 5-4 on the season, with a 3.84 ERA. In an August game with Buffalo, he gave up four runs in relief and took the loss, according to The Buffalo News.

"You keep moving on. I have to forget this outing and get ready for the next one," Zimmerman told The News afterward. "It hurts because the team lost a big game, but I have to believe I can do my best the next time."

He moved to independent Rio Grande Valley for part of 1997, then to Atlantic City and Newark for 1998. He concluded his career in 1999 with 30 relief outings at Newark.

Zimmerman has since become a scout and then an agent. In 2011, he watched one of his players, Jason Motte, throw the final pitch of the World Series for the winning Cardinals, according to Al.com.

"After scouting for a few years, I realized I wanted to be on the side of the player, protect the player," Zimmerman told Al.com. "As a scout, you're working for the team and you're on the other side." 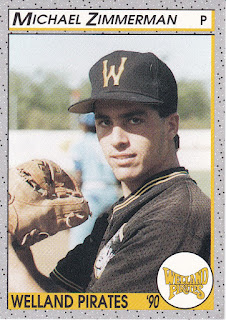