Kevin Young played baseball for that winning feeling; Played in bigs over 12 seasons

Kevin Young and his Pittsburgh Pirates came out the winner in this September 1997 contest and they did so as they still had a shot at the playoffs, according to The Pittsburgh Post-Gazette.

Young spoke to The Post-Gazette about being in that position after a win.

"You play the game for that feeling we had when we were going off that field," Young told The Post-Gazette. "That's the feeling I got when I was 6 years old. That winning feeling."

Young got that feeling in his sixth season in the majors. He went on to see time in 12 and, in all but one of those campaigns, he played for the Pirates.

Young's career began in 1990, taken by the Pirates in the seventh round of the draft out of the University of Southern Mississippi.

Young started with the Pirates at short-season Welland. He hit .244 in 72 games. He then made high-A Salem, AA Carolina and saw four games at AAA Buffalo in 1991.

That May, he spoke to The Buffalo News about his time in the majors.

"I've got a great desire to win, sometimes for the wrong reasons," Young told The News. "I want to prove everybody wrong, prove that we can win. That's been the only negative for me so far, putting too much pressure on myself to do too much."

In August 2001, Young hit a home run off of future Hall of Famer Randy Johnson - on a night Johnson struck out 16 - and Johnson later gave Young credit to The Associated Press.

"I threw a fastball to Kevin Young, he's a good fastball hitter and it just got too much of the plate," Johnson told The AP. "He hit a good pitch, my best pitch."

Young continued with regular playing time through 2002. He played his final 52 games in 2003.

Young has since returned to work with the Pirates. In spring 2016, he worked to help Pirates first basemen in camp. 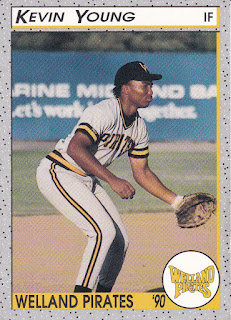