Peters had had a run in high school - 51-0 - but, after multiple issues, didn't make it to the pros, but Schulte remembered Peters as a hard worker.

"Jon worked harder than anybody on the team," Schulte told SI later. "He would run five miles every morning to stay in shape."

Schulte's career began in 1990, taken by the Pirates in the third round of the draft out of Brenham High School in Texas.

Before hitting Brenham High, Schulte played Little League with Brenham and helped them make the 1986 Senior Little League title game. Schulte picked up a hit, but his team lost.

Schulte won school and district MVP in 1990. He also won all-state and other honors. He doubled and scored in the game SI attended.

With the Pirates, Schulte started at short-season Welland. He hit .216 over 63 games. He went 3 for 3 in on August game and scored a run in another.

On his Welland card back, the 5-foot, 8-inch Schulte cited Gregg Jeffries as his favorite major leaguer because "we're both short and play the infield." 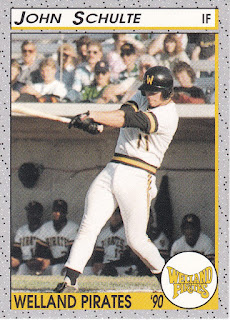