John Curtis went on from Ohio's Fairfield High School to Eastern Illinois University in 1986 and his coach touted his playing skills, according to the university.

Curtis' coach was his football coach and the coach spoke of Curtis' quarterbacking skills.

"John has got awfully good feet and he's a pretty pure passer," Fairfield coach Ben Hubbard told the school in a release. "Eastern Illinois has got an excellent recruit. John has always been a winner."

While Curtis went to Eastern Illinois to play football, he also went on to play baseball. He signed with the Pirates as a 20-year-old outfielder. He played two seasons and topped out in short-season ball.

Curtis' career began in 1989, signed by the Pirates as a free agent out of Fairfield and Eastern Illinois.

At Fairfield, Curtis threw a 26-yard touchdown pass in one season-ending contest.

With the Pirates, Curtis started at rookie Princeton. He got into 47 games and hit .209. He also knocked in 17 and stole four bases. 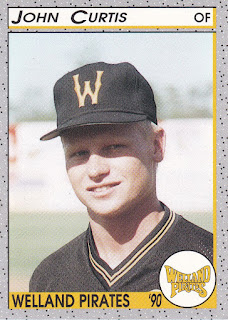