Joe Ronca hit a game-tying grand slam in 11th season as pro; Made AA, not bigs

Joe Ronca came on as a ninth-inning pitch hitter for the Bowie Baysox in this April 1999 game, the bases loaded, his team down by four, according to The Washington Post.

Ronca wasted no time tying the game and sending it to extras, as he hit a game-tying grand slam, The Post wrote.

Ronca hit that grand slam for AA Bowie in his 11th season as a pro. He'd played through affiliated ball, then independent ball to get another shot at the ladder with the Orioles that year in 1999. For Ronca, though, that time at Bowie marked the furthest he got. He never made the majors.

Ronca's career began in 1989, taken by the Pirates in the ninth round of the draft out of Gonzalez Tate High School in Florida.

Ronca started with the Pirates in the rookie Gulf Coast League. He hit .218 in 45 games. He moved to short-season Welland for 1990, then single-A Augusta for 1991. He picked up two hits in a May game there.

Ronca split 1992 between Augusta and high-A Salem. He hit .222 over 74 games that year. He then played all of 1993 at Salem. He hit two home runs in a July game and picked up two more hits in an August contest.

That season with Salem, though, proved his last in the Pirates organization. He moved to independent Alexandria for 1994 and stayed there for three seasons. He hit at least .317 each season.

He then moved to independent Springfield for 1997. He played two seasons there before signing with the Orioles and playing 1999 at Bowie. He got into 46 games there and hit .242 to end his career. 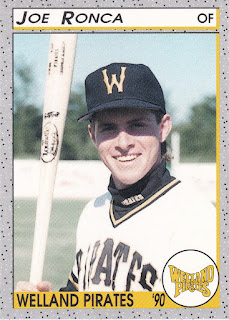